A recent interview conducted by Ventures Africa with Allan Kamau, an associate director in the Kenya office of Portland Communications, on the topic of social media in Africa highlighted its growing importance in generating consumer research data.  Kamau said:

It [social media] is becoming a mainstream way for corporations to talk to consumers but also for them to listen in to conversations so that they know what consumers are thinking about and what some of the concerns they have around different brand issues are.

The channels that Africans are choosing for social media are varied, including a number of home grown platforms.  However, Facebook has gone in just five years from having virtually no Sub-Saharan presence to being the number one used social media platform.  In September of this year, Facebook published for the first time its user numbers for Nigeria and Kenya. The two countries have almost 20 million active users, the majority of whom are accessing the platform via their mobile devices. Earlier this year, Facebook opened its first African office in Johannesburg. South Africa has 12 million Facebook users, which when combined with Kenya and Nigeria, make up a large proportion of Sub-Saharan Africa’s active Facebook users.

Nigeria, Kenya, and South Africa are the continent’s heavyweights when it comes to social media usage, due in part to population and infrastructure, but other countries are also seeing impressive adoption rates. A 2014 report by Balancing Act entitled The Sub-Saharan African Media Landscape, estimates that 27% of social media users in Ghana were Facebook users, while the comparable figure in Angola is more than 50%.

Twitter has also recently made tremendous gains in Africa. A 2014 study by Portland Communications analysed the continent’s Twitter behaviour using geolocation analysis.  Not surprisingly, the “hotspots” for activity are also the continent’s leading emerging markets — Kenya, Ghana, Nigeria, Egypt and South Africa.  Also noteworthy, however, are the levels of activity in other parts of the continent, such as Morocco, Democratic Republic of Congo and Angola. 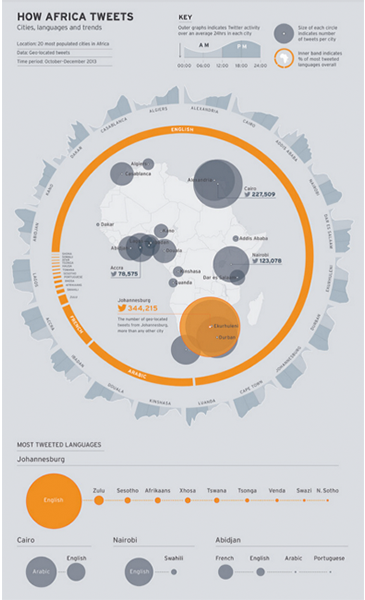 Claire Melamed, Director of Growth, Poverty and Inequality Programme at the Overseas Development Institute, recently wrote an article for Aeon magazine on the dearth of data in the developing world on people’s attitudes towards poverty.  She argues that  “[t]here is a huge appetite for data on objective things – on health, wealth and education, for example. But data on what people actually think is lagging far behind.”  [Emphasis added]

The growth of social media usage in Africa represents one innovative way to fill some of these quantitative and qualitative data gaps. In effect, current levels of social media usage by Africans are high enough to make data collection and analysis on a range of public policy and consumer market issues viable and meaningful, now.  This may not apply to all issues in all countries, but we think that the usage figures noted above strongly suggest that there is significant applicability now and that it will only grow in the coming years.

Africans are increasingly taking advantage of social media to express their views, attitudes, aspirations and concerns through an unfiltered medium.  This rising volume of African voices  provides a new way to hold governments, donors, and companies accountable; unprecedented technologically empowered agency. It also presents enormous opportunities for Africans and non-Africans to broaden and deepen knowledge of a continent being transformed.

At the same time, however, social media and their attendant data have some possible downsides. For example, African users are just as vulnerable to surveillance and intimidation in social media channels as social media users anywhere else in the world. Likewise, are Africans positioned to take advantage of the data they are producing? Do local firms, for instance, have the analytical capabilities to process these data sets or will they lose out to better resourced foreign competitors?

As social media and Internet adoption rates continue to soar across Africa, the utility of social media for research purposes will only increase.  Africans’ diverse attitudes, opinions and perspectives are on full display in social media discussions.  Including social media analysis in any sort of strategic decision-making — in particular, risk management or market research exercise — is fast becoming a must in Africa.

Investors buying into hype, not reality, in Africa’s consumer markets:

We have no idea if Africa is rising:

2005-2015 ICT data for the world, by geographic regions and by level of development. (Published by ITU)

What do they want? Aeon http://aeon.co/magazine/society/why-we-need-data-on-what-the-poorest-think/

Facebook rakes in users in Nigeria and Kenya, eyes rest of Africa